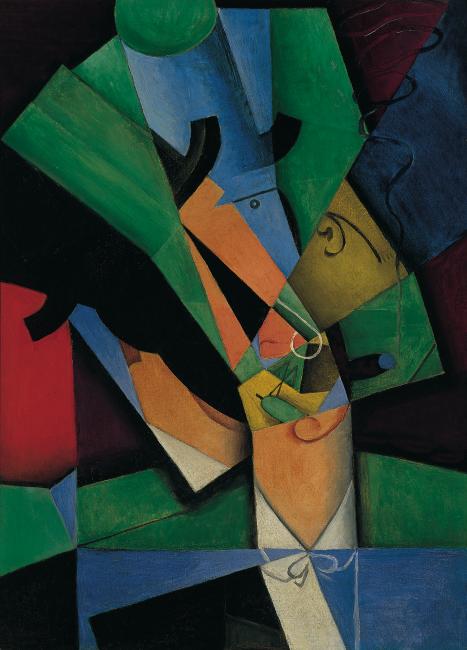 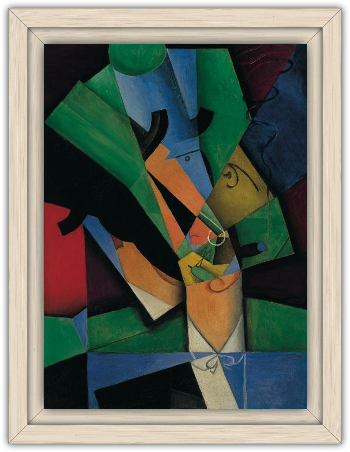 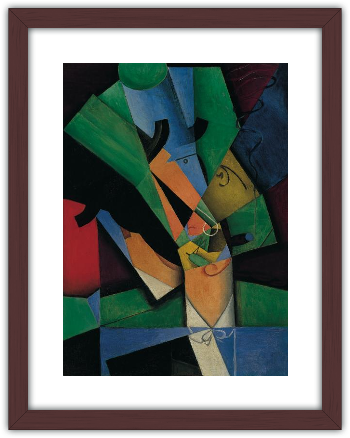 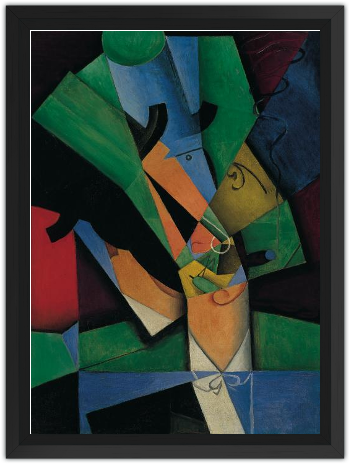 The Smoker in the Thyssen-Bornemisza collection was painted at Céret in September 1913. Juan Gris had spent from the beginning of August to the end of October in this town in the French Pyrenees ? ?The Mecca of Cubism,? as Kahnweiler called it ? where he coincided for a few days with Picasso, a fellow Spaniard and neighbour in the Bateau-Lavoir, whom Gris called ?maestro.? According to Christopher Green, the manner of breaking up and fragmenting the head into its different parts and arranging them in geometric fashion in the shape of a fan, is due to the direct influence of the Heads Picasso painted at Céret in the spring of 1913. By this time the Cubism of Picasso and Braque had taken a new, more conceptual and synthetic turn, and their compositions, into which they had begun to incorporatepapier collé, had become simpler and flatter.

A preparatory drawing for The Smoker, bearing the dedication ?A mon cher ami Frank Haviland . Bien afectueusement . Juan Gris,? allows us to entertain the hypothesis that the painting is a portrait of Frank Haviland , a rich American friend of Leo and Gertrude Stein who had just restored a monastery in Céret where he housed his important collection of African art. A descendant of David Haviland , who established a porcelain manufactory at Limoges in the nineteenth century, Haviland was a major patron of young avant-garde artists of Paris and he himself had painted a few works under the name of Frank Burty . In the drawing, which is similar in format to the oil painting, Gris established practically all the basic lines of the composition. Both the drawing and the oil highlight a number of elements that characterise the subject, such as the stiff shirt collar, the bow tie and the top hat ? the clothing in which Haviland was attired in a photograph Picasso took of him in his Paris studio in 1910.

The dominant oblique line in the upper part, which recalls Picasso?s Heads, contrasts with the solidity and frontality of the lower part, in which the shoulders and neck afford the composition great stability. To hint at depth, Gris depicts the figure from different viewpoints, making some parts difficult to recognize . The discordant note in this carefully studied geometrical order is the sinuous line of cigarette smoke which changes colour in the different fragments of the painting. The caricature-like schematic references to the nose, ear and chin bear a certain similarity to the linear features of Picasso?s Heads, though they also remind us of Juan Gris?s beginnings as a graphic illustrator. The large green, blue, orange and red planes ? absent from the works Picasso and Braque were producing at the time ? make Gris?s painting particularly original.

The present portrait belonged to Gris?s dealer, the German Daniel-Henry Kahnweiler , and was undoubtedly one of his favourite paintings, as in 1921 he repurchased it at the sale of possessions confiscated from him by the French Government at the outbreak of the war, this time for the Galerie Simon in Paris, which he ran from 1920 to 1940.