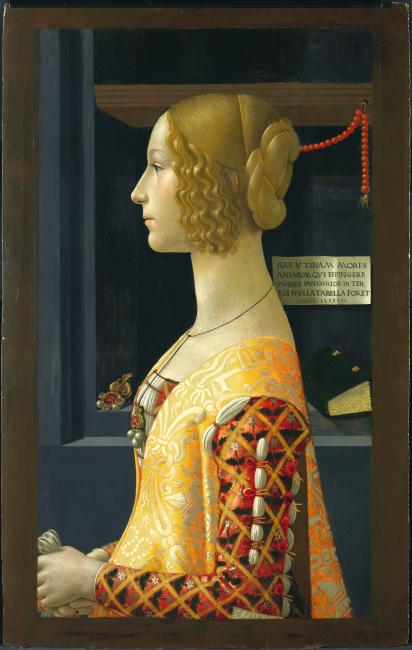 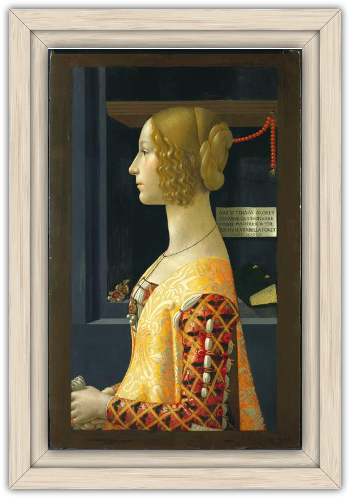 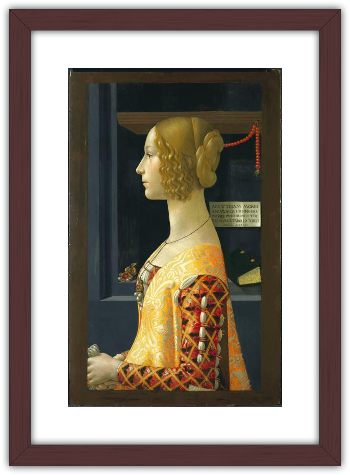 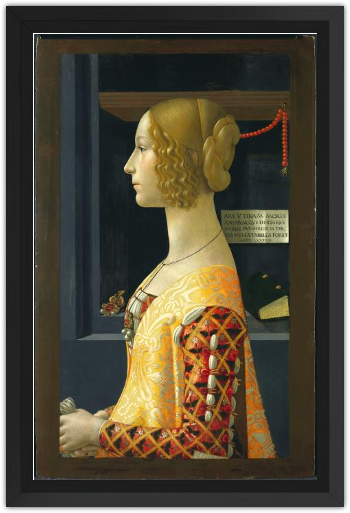 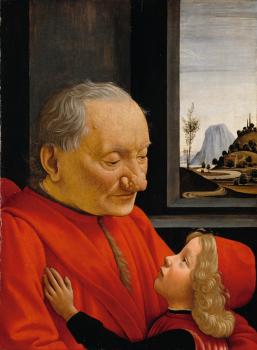 Ghirlandaio began his career as a goldsmith. According to Vasari: ?from the habit of constantly drawing, [he] acquired great agility, skill and deftness, so that many say that while he was slow as a goldsmith, when he painted the country people or anyone who passed through his studio he immediately captured their likeness?. Vasari also noted that, ?this is demonstrated by innumerable portraits by his hand in which one sees a remarkable lifelikeness?. We find further references by Vasari in his text to Ghirlandaio?s skill in this pictorial genre.

Giovanna Tornabuoni is one of the most appealing and fascinating portraits in the Thyssen-Bornemisza collection. This beautiful image is set against a background with a niche containing various objects referring to the sitter?s refined tastes and character. The jewel with the dragon, two pearls and a ruby, which forms a set with the pendent hanging from a silk cord around her neck, refers to her public life. This dragon brooch is balanced on the other side by the prayer book and string of coral beads that has been identified as a rosary, both of which emphasise her piety and her inner life. In between them is a cartellino with part of an epigram by Martial (XXXII) entitled To a Portrait of Antonius Primus and the date underneath. It reads: ?Art, if only you could reproduce the character and the spirit. There would be no finer portrait in the world?.

This image is a classic example of the Florentine Quattrocento portrait in which the sitter poses upright, in strict profile and bustlength with the arms in repose and the hands joined. In the face and body the features and proportions are idealised. In the present example, this is evident both in the lines that create the slender neck and shape of the body and in the expressionless and perfect features. As in other portraits of this period, the ideal beauty used to depict Giovanna Tornabuoni is based on theoretical principles and examples taken from classical antiquity, which artists of this date then combined with the individual features of the particular sitter.

The sitter?s identity was established through medals of her, such as the one attributed to the engraver Niccoló Fiorentino in the National Gallery of Art, Washington, in which Giovanna is depicted in profile with a jewel around her neck and an inscription with her name. The medal was possibly commissioned in connection with her marriage. Ghirlandaio also depicted her in one of the frescoes in the series executed in the chancel of Santa Maria Novella, commissioned by Giovanna?s father-in-law and painted by Ghirlandaio between 1486 and 1490. In these frescoes Giovanna occupies an important position in the episode of The Visitation. Placed to the right of the composition, she is at the head of a line of three figures. Although depicted full-length, her pose, dress and accessories are the same as in the present panel.

Giovanna degli Albizzi married Lorenzo Tornabuoni on 15 June 1486. Born on 18 December 1468, she died two years later, on 7 October 1488, during childbirth. For Jan Lauts the present portrait is prior to the fresco in Santa Maria Novella and may have been the modello for that work. John Pope-Hennessy, however, considered it to be later than the fresco and to be a posthumous portrait in which the date on thecartellino is that of Giovanna?s death. The painting, which was among the possessions of the Tornabuoni family in their palace in Florence, came into the ownership of the Pandolfini family in the 17th century. Later it was in the collection of baron Achille Seillière and the princess Sagan. In 1878 it is recorded in Brighton in the collection of Henry Willet, from where it passed to that of Rodolphe Kann. Acquired by J. Pierpoint Morgan in 1907 it entered the Thyssen-Bornemisza collection from the Morgan Library, New York, in 1935.While it was in the Pierpont Morgan Library an old photograph of the West Room taken prior to 1913 shows the panel in its present frame, displayed on an easel on one side of the room surrounded by other works from the collection.