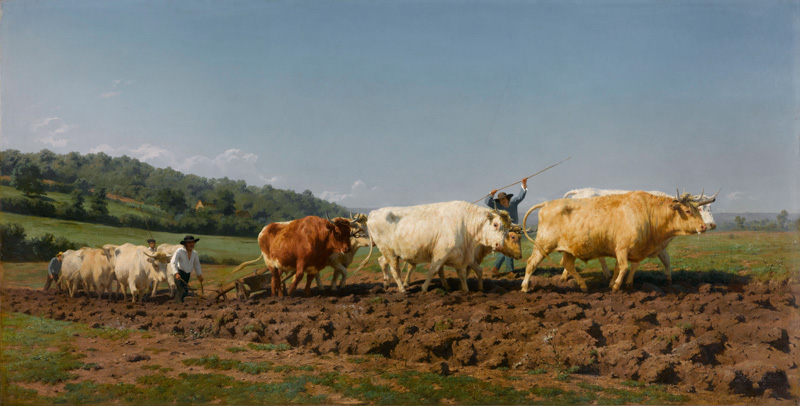 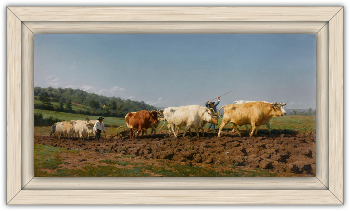 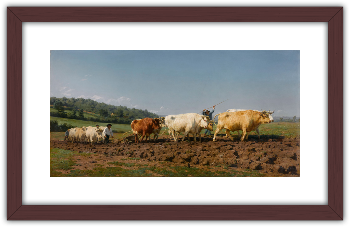 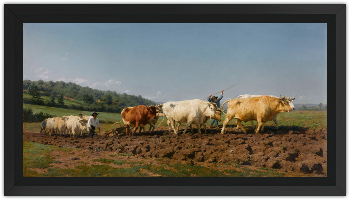 This scene, dated 1849, shows the first ploughing or dressing, which was done in early autumn to break the surface of the soil and aerate it during the winter. The pretty rolling countryside with wooded hills in the distance provides the background for two teams of oxen pulling heavy ploughs. The freshly turned soil scores the foreground.

Attention is focused on the first team of Charolais-Nivernais cattle, whose light russet and white coats gleam in the cold, pale light. It is primarily an animal painting, and the heroes are the oxen themselves, leaving little room for the men: the cowherd is a diminutive figure. It is a hymn to agricultural labour, whose grandeur was magnified because, in these post-revolutionary days, it was easy to contrast with the corruption of the city. It is also tribute to provincial regions ? here the Nivernais, with its agricultural traditions and rural landscapes.

For all these reasons, this realist work drew almost unanimous critical acclaim. The State, which had commissioned it from Rosa Bonheur in 1848 for the Musée de Lyon, decided to keep it in Paris, at the Musée du Luxembourg. When the artist died, rich and famous in France, England, but particularly in the United States, it was put in the Louvre and was later allocated to the Musée d'Orsay.
Source: Musée d'Orsay
The email was successfully subscribed to our list
Aceptar